Many stage productions require the firing of a cannon on stage. Whether it be for a production of Nutcracker or a fake pirate ship in your back yard, this can be a tricky effect to safely pull off!

Basically, there are two ways to proceed. You could use pyro (a Pre-loaded Flashpot) or an Air Cannon. There are pros and cons to both applications. Let's discuss these in detail. 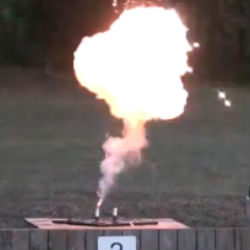 Pre-loaded Flashpots are small devices that create a flash with smoke and a BANG! They are available in different colors (White, Red, or Green) and in several sizes. These require the use of a Gerb Holder to safely secure inside the end of your prop cannon, as well as a professional Pyro Controller to activate.

Realizing that several states require special permits to use Pre-packaged Pyro (like these Pre-loaded Flashpots) and many cities/counties require permits to use them as well, these items are not for everyone. Also, the cost/shot may be prohibitive ($11+ per shot) and the presence of children on stage is a likely deterrent.

Here at Theatre Effects we have a saying, "When in doubt, leave it out!" These types of pyrotechnic effects are not for everyone... which is why many productions choose to instead use an Air Cannon to simulate the effect! 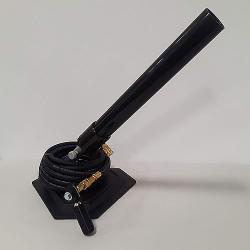 Unlike using real pyro, the use of an air cannon allows for versatile application of the effect and can be very safe. Any of our Small Barrel or Medium Barrel confetti cannons will work for this effect.

When constructing your prop cannon (which can easily be made from 4-inch PVC Pipe and fittings), simply have a hole at the back large enough to accommodate the barrel of the confetti cannon. Instead of using confetti or streamers, load the cannon with a very small amount of BABY POWDER. When activated, the cannon will make a nice “BANG” and poof of powder (which will look like smoke). This is a very good, very safe, and VERY versatile way to create this effect. Unlike using pyro, other items can be added to the cannon and "shot" out. Some productions don't so much want the "smoke" effect as they want more of a comedic effect. You could use confetti or streamers (or both) or bits of painted foam rubber to simulate flying shrapnel. Heck, you could even load it with a small "cannon ball" made out of soft foam! When fired, your "cannon ball" could bounce off of a set piece or plop on the stage floor - which would be very funny!

There is one down side to using and air/CO2 cannon for this effect: it does not create a FLASH like pyro would. Most productions don't really worry about this, as the visual of the cannon firing (which can be aided with sound/lighting effects) is enough to startle your audience. The use of a Strobe Light could also be considered.

The greatest advantage of using an air cannon (besides safety factors) is cost. While pyro will run about $11.50 per shot, using an confetti cannon costs about $4 in expendables. If you use one of our AE03 Air Cannons, the operational costs drop to $1.50 (since no CO2 is required and the air is "free").

We hope these ideas will help you find the correct product to fit the needs of your production. As always, you are welcome to call us anytime with questions: 1-800-791-7646