* NOTE: This product does not qualify for flat-rate shipping.
Exact shipping fees will be charged.  Please call us for
more details or to obtain a freight quote.

There are four big reasons to invest in the new Effects Master LED series.

With the Effects Master Series, Wildfire has always produced the best quality fluorescent fixtures with much higher output than anything else on the market. But the new LED Series blows even those fixtures away. (Forget about other manufacturers’ products. There is just no comparison.)

In short, these UV-LEDs are powerful!

SableLED™ lamps peak at 365nm (the ideal wavelength for black light) and have very little visible light. Even the best fluorescent lamps (like our SableLUX® BLB lamps) have a little bit of visible purple light mixed in with the UV black light. The 365nm UV-LEDs used in SableLED lamps have much less visible light so you get almost pure invisible UV light. This produces a much brighter, more stunning UV effect.

With everything that has been said and written about LEDs, does this really need an explanation? Output per watt from LEDs is a fraction of what it is using other technologies, including fluorescent. This is especially so with VHO ballasts which overdrive fluorescent lamps to double their normal wattage to get more output.
We’ve done the math… and on a Watt-per-Watt comparison, the LED Series 4-lamp model produces 380% more UV output per watt than the fluorescent 4-lamp VHO Series. That’s almost 4 times the energy efficiency!

Even comparing with the 2-lamp fluorescent Energy Series (designed to be energy efficient, at the cost of some output), the LED Series 2-lamp model produces 257% more UV output. More than 2 and a half times the energy efficiency. That translates into much lower energy costs, lowering the total cost of owning and operating the fixture… all while getting more and better quality output.

And that’s not even the end of the story…

Wildfire SableLED™ lamps are tough and don’t break easily; they last around 5 times longer than fluorescent tubes; and they are self-ballasted, reducing points of failure.

All that means you’ll spend less time and money maintaining your Effects Master LED Series fixture. For commercial applications with many fixtures, that can amount to serious savings over the long haul. 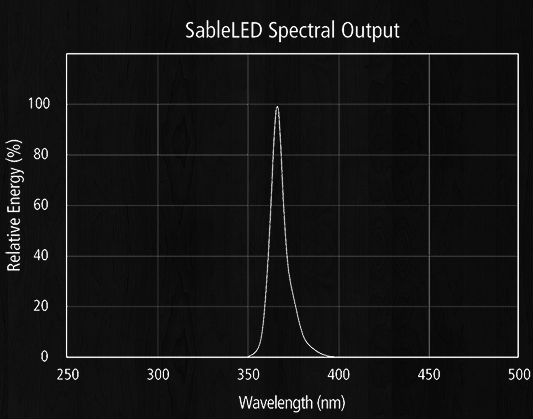